5 reasons people don't perform at work, and how YOU can change that! 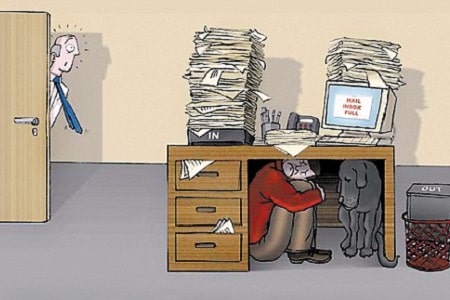 Why Aren't They Doing What I Asked Them To Do?

Then we happen to overhear that the same person spends unpaid hours volunteering for their church group, or coaching little league, and the non-performance puzzle becomes even more frustrating.

Mark Sanborn identifies 5 reasons people don't do what you ask them to at work. Here they are, listed from most common to least common:

A widely cited Interact/Harris poll reports the following top communications complaints by employees about their managers:

The number 2 complaint above by employees is that managers fail to give clear directions. 57% of employees said that this was a problem. You can't know WHAT to do if the directions are unclear.

In their book “Developing Management Skills”, Whetten and Cameron propose the following equation:

Ability is the team member’s aptitude as well as the training and resources available.
Motivation is the result of desire and commitment.

Most often, lack of ability is a TRAINING and/or RESOURCE issue.  However motivated your people are, lack of training or resources keeps them from being able to apply their motivation to the job in hand.

Remove barriers.  What keeps them from doing better work?  Your job as a manager is to remove the impediments.

This is a very effective first step in addressing performance. It signals to people that you're interested in their point of view and are willing to make necessary changes.

This exercise recognizes the value of constant skill development and the value you place on the employee.   Provide additional training to team members where needed.  Explore with them whether they have the actual skills required to do what's expected.  Given the pace of change of technology, it's easy for people's skills to become outdated.  Employees are motivated when they are challenged and see personal and professional growth.

Resource management and retraining will often cure poor performance.  People get frustrated when they don't have the knowledge, resources and skills they need.

3.  They don't know why they are supposed to be doing it.

This is a MOTIVATION issue.  For people to want to do something, they need compelling reasons that make sense to them.  Motivation is the difference between compliance and commitment.

Explain the "Motivational Why"

When communicating a task/a job function/a complex activity, explain the reason why.  Sanborn calls this the "motivational why".   People have a natural desire to ask why.  Regrettably many managers see this as a form of insubordination rather than a natural curiosity.  But often management has reasons that make sense to us but not to our people, and unless we take the time to thoroughly communicate why something is needed, how it fits in the big picture, people feel "managed" and resentment follows.  Taking the time to explain why is a key step to a motivated team.

People don't only need the "business why", though that is important.  They also need the "What's in it for me?"

The "motivational why" includes reward and recognition.  Rewards are tangible, recognition intangible.

Often we assume rewards to be monetary.  But research suggests that the association between salary and job satisfaction is very weak.  Malcolm Higgs points out: "Far too many companies work on the basis that money motivates.  But money is not a motivator.  If you give people more money you might get a quick lift in productivity but the effect of that dies off incredibly quickly.  By and large, that is not what employees are there for."

In the Interact/Harris poll quoted above, the number 1 complaint by employees is that managers do not recognize their achievements.

People need to be noticed.  Thank them and praise them - with specifics - when they have done a good job.  Make people feel valued and trusted. Know what's important to them and reward them according to how they want to be rewarded.

Find out what makes them tick

To do that, we must take the time to find out what motivates them.  We must personalize the motivation to the individual.   Less than 15% of people have ever been asked what motivates them, which means that 85% of attempts to motivate people are based on assumptions and averages.   Millennials especially are less likely to be motivated by a pay rise and more likely to value empowerment, recognition, flexible working arrangements, the ability to work within a team, and so on.

Our job as managers is to motivate and increase morale, to create an environment where people find it easy to choose to be motivated.

Robert Levering, in his book "A Great Place to Work",  asks the question: What do employees see as a great work environment?  People always talk about three things:

Model the behavior you expect.  Sometimes we expect our people to be more motivated than we are.  As managers, everything we do promotes or pollutes.  We are the thermostat, not the thermometer.

We need to bring the same energy and commitment to our work that we want our teams to bring.

This is an ABILITY issue, by which I mean inherent ability, not training or resources.   It's rare but serious.  Your team member is trained, wants to do the work, is willing to make the effort, but doesn't have the skill-set.

Are the task(s) that your employee is unable to do an integral part of their job?  Can they be reallocated/outsourced and leave the employee with sufficient meaningful work to justify their continued presence in the position?

If you can reassign or outsource tasks it may be the best solution (explain what you are doing and why).  If a task is central to the employee's role, then reassignment, demotion or termination are likely to be your only options.  Often we shy away from making such decisions but the sooner you act, the better.

Very occasionally, your knee-jerk reaction is correct.   They really are lazy/can't be bothered/don't like you.   Insubordination leading to non-performance is uncommon, serious, and grounds for dismissal.  Read Mark Sanborn's blog (link below) for further input on this topic.

More Resources:  Employees: Fix them or fire them? - Mark Sanborn

The Top Complaints from Employees About Their Leaders - Harvard Business Review